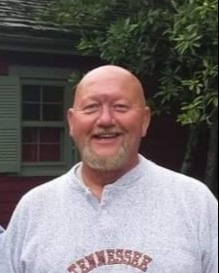 Barry Lewis Smith of Mossy Grove, Tennessee passed away at Methodist Medical Center on September 4th, 2022.
He was preceded in death by his brother Jeff Smith and Stepfather Ross Jones
He leaves behind wife Laurel Smith, his twins Jacob Smith (Kendra) and Amanda Crouch(Cale) and Kylie Richardson. His beloved grandchildren Hannah, Ava, Ina Smith and Caleigh, Evan and Reese Crouch. His mother Joan Jones of Mossy Grove and Father Edward Smith of Elgin. Brother Chris Smith and Sister Molly Smith, and his Toledo sisters Kim, Jody, Kelly and Karry along with a host of family and friends.
Barry was a graduate of Wartburg Central school class of 1975. There he played basketball, baseball and football and could be frequently found at home games with other Alum reminiscing and giving their game tactics to anyone that would listen.
Barry served in the US Navy for almost 17 years from 1976-1993. He served on the USS Francis Scott Key (SSBN-657) where he retired as Missile Tech(SS) First Class Petty Officer.
He could be spotted on the golf course, at Wartburg Central High school games, and UT Knoxville supporting all Vol sports!
He enjoyed his retirement spending time with his wife, reconnecting with classmates and old Navy buddies, and his beloved grandchildren.
It’s hard to describe such a big personality in a small space. He lived life to the fullest and made everyone feel like a friend. His big smile and laugh will be missed by all who knew him. Go Vols!

Schubert Funeral Home is honored to serve the family of Barry L. Smith.

To order memorial trees or send flowers to the family in memory of Barry L. Smith, of Wartburg, please visit our flower store.