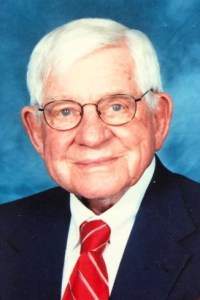 Charles Bradshaw, age 95, of Lebanon, Tennessee passed away April 12, 2019.  Born August 30, 1923 in Mascot, Tennessee (Knox County), he was the son of the late A.C. & Nola McBee Bradshaw.  Charles received an Associate of Arts degree from Tennessee Wesleyan College before earning a Bachelor of Science degree from Tennessee Tech and a Master of Arts degree from the University of Tennessee.  During World War II, he served in the U.S. Navy as a Lieutenant (jg) aboard APA-217 in the Pacific theatre of operations, leading initial assault waves into Okinawa and carrying the first occupation troops to mainland Japan.

Charles began his career in mathematics as an assistant professor at Tennessee Polytechnic Institute.  He then served as a chief of computation unit of the aero ballistics laboratory of the Army’s Guided Missile Development Division headed by Dr. Werner von Braun.  Later, he joined Oak Ridge National Laboratory as a mathematician in the mathematics panel.  He returned to the space program in 1956 as a branch chief in the computation laboratory of the Army Ballistic Missile Agency.  When the von Braun development team transferred to NASA to form the Marshall Space Flight Center in 1960, he became deputy director of the computations laboratory and served in that position for ten years.  In 1971, he became director of the computer center at Vanderbilt University and remained in that position until retiring in 1988.

He became a member of the Association of Computing Machinery in 1954, received the Distinguished Service Award in 1988, and was named a Fellow in 1994. He was also the author of four books including “Post Your Peg High” and “Rockets, Reactors and Computers Define the 20th Century”.

Charles was a long time member and elder of the First Presbyterian Church in Lebanon, TN.  He was preceded in death by his wife, Bernice Scott Bradshaw; brother, Earl Bradshaw;  and two step-grandsons, Dylan Johnson and Sawyer Webb.

A celebration of Charles’ life will be held at First Presbyterian Church, 304 West Main Street, Lebanon, TN, Tuesday, April 16, 2019 at 4pm with Rev. Sherard Edington officiating followed by visitation until 7pm.  Burial will be Wednesday, April 17th at Eastview Memorial Gardens in Strawberry Plains, TN.  In lieu of flowers, memorial gifts may be made to the First Presbyterian Church of Lebanon.

To order memorial trees or send flowers to the family in memory of Charles Bradshaw, of Lebanon, TN, please visit our flower store.