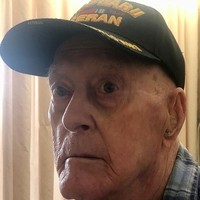 Cleveland Loy, 95, of Oak Ridge formerly of Wartburg died Sunday, February 16, 2020 at Ft Sanders Hospital following a stroke.  He had been residing in the Tennessee State Veterans Home prior to going to Ft. Sanders.

In 1935, when Norris Dam was being built, his family moved to Clinton, TN. He enlisted in the Army Air Force during WWII where he served 4 years. He owned and operated several businesses while living in Morgan County for over 27 years.  Upon retirement, he moved to Norris Lake where he enjoyed his life-long passion fishing and became a fishing guide. He later moved to Oak Ridge, TN in 1994 and remained there until he moved to the Tennessee State Veterans Home in January 2020.

The family will receive friends and family at the Holly Gamble funeral home Clinton, TN on Thursday, February 20, 2020 from 10:00 to 12:00 Noon with funeral service to follow at 12:00 Noon. Interment will follow immediately at Farmers Grove Baptist Church on Block House Valley Road. Holley Gamble Funeral Home in Clinton is in charge of all arrangements.  holleygamble.com

To order memorial trees or send flowers to the family in memory of Cleveland Loy, of Oak Ridge, TN, please visit our flower store.
Send a Sympathy Card