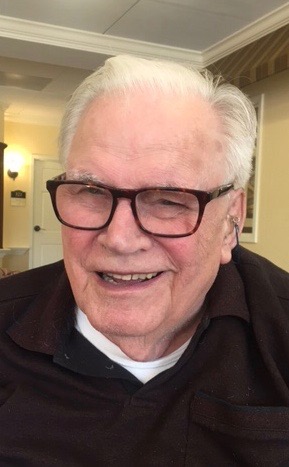 LAWRENCE D. KELLER, a resident at the time of Silverado Memory Care in St. Charles, IL, passed away peacefully with family at his side on Wednesday, November 18th, 2020 at the age of 87.

Lawrence was born in Creston, IA.  He later moved to Joliet, IL where he met his wife, raised his family in New Lenox, IL and then retired to Crossville, TN.

He served eight years in the Navy including time during the Korean War.  He was a retired member of the United Auto Workers Union working at the Ford Motor Company Chicago Stamping Plant in Chicago Heights, IL for over 41 years.  Lawrence had a passion for cars, enjoyed fishing, woodworking, building and repairing things, and could always be found tinkering around in his barn or garage with his tools.  He was proud of his family and worked tirelessly to support them however he could, always appreciated a good joke and was known for his warm smile, and adored by all of his caregivers.

In lieu of flowers, memorials to the family can be made.

Visitation services with military honors will be held on Monday, November 23rd, 2020 from 1:30-4:30 at Overman-Jones Funeral Home in Plainfield, IL.

Interment will be at Union Grove Cemetery, Sunbright, TN.  Graveside services will be held on Saturday, November 28th, 2020 at 11:00 a.m. EST.  Arrangements will be managed by Schubert Funeral Home, Wartburg, TN.

Local arrangements were made by Overman-Jones Funeral Home, Plainfield, IL.

To order memorial trees or send flowers to the family in memory of Lawrence Keller, please visit our flower store.
Send a Sympathy Card