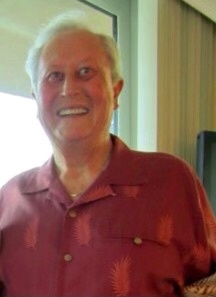 Leonard Eugene (Gene) McNeese, born May 11, 1935 in Round Rock, TX to Leonard and Rosemary Hall McNeese, passed away peacefully at his home in New Smyrna Beach, FL on Thursday afternoon, April 15.  Gene's parents began as sharecroppers but eventually owned their own farm in Littlefield, TX.  As a young student, Gene’s teachers recognized his potential and allowed him to check out encyclopedias to read over the weekend; this was the foundation for his brilliant mind.  Gene worked his way through Texas Tech in Lubbock, graduating in June 1957 with a B.S. in Chemical Engineering, ranking second in a class of 452 male students.  He was an ROTC member, intending to become a fighter pilot with the Air Force; upon graduating he declined his commission when his tour of duty (during the Vietnam War) was extended to 6 years, after that much time he thought his degree would be diminished. Gene came to Oak Ridge National Laboratory for 2 1/2 months and stayed 44 1/2 years, working his way from a summer internship to his last position as Director of Chemical Technology (1994-2001), which at that time was ORNL'S largest research division.  While working, he attended The University of Tennessee, Knoxville, earning his Master’s degree.  He completed the coursework for his PhD but being involved in a project about which he was passionate, he never completed his thesis.   Gene married Barbara J. Redmon in 1986.  He then learned something completely new, double entry bookkeeping and accounting, so he could help in Barbara’s store, Suited for Business, in Knoxville TN.  Gene was interested in all things science.  He loved nature: fishing, hiking, rock climbing, rock hunting, and bird watching.  One of his favorite places in FL was a restaurant on the intercoastal waterway, where he could watch sunrises, fish jumping out of the water, rare white pelicans, dolphins, and manatees.  Last year he and Barbara bought a home in Deltona, FL which he loved because of the many sandhill cranes that wander by.  They had named the house "The Crane on Carrin." He felt fortunate to live on the beach full time for the last 20 years.  Every 5 years, Gene challenged himself to do something completely new:  white-water canoeing, owning and flying glider planes, scuba diving, astronomy (building his own telescope), winemaking (building a 2000-bottle wine cellar), and jewelry making/lapidary.  He loved travel, art, poetry, limericks, and music.  He curated a music collection rivaled by none.  He liked to cook using slow smoking and sous vide methods.  Gene was a member of First United Methodist Church in Oak Ridge, TN.  Preceding him in death are his parents; son, Gregory E. McNeese; in-laws, Larry (Bill) and Gertrude Redmon; and sister-in-law, Phyllis Newport.  Left to cherish his memory are his wife, Barbara Redmon of New Smyrna Beach FL; daughter, Sharon McNeese and husband Brant Hamilton of Hot Springs Village, AR; son, Michael and wife Gabrielle McNeese of Del Rio, TN; grandson, Jason and wife Melissa McNeese of Ellijay, GA; sister, Sandra and husband Curtis Fuller of Lubbock, TX; brother, David and wife Jeannette McNeese of Lubbock, TX; sister-and brother-in-law, Linda and Gary Petrey of Lancing, TN; brother-in-law, Harold Newport of Wartburg, TN, as well as multiple nephews, nieces, grandnephews and grandnieces. The family will receive friends on Sunday, April 25, from 4:30 to 6:00 pm at Schubert Funeral Home, 1318 Knoxville Highway, Wartburg.  He will be laid to rest on Monday, April 26 at 1:00 pm beside Gregory in the Garden of Gethsemane at Oak Ridge Memorial Park, 1501 Bethel Valley Road, Oak Ridge.  Dr. Paul Frick will officiate. Florals may be sent to Schubert's.  Memorials may be mailed to Liberty Baptist Church building fund, P.O. Box 40, Wartburg, TN 37887.

Schubert Funeral Home is honored to serve the family of Leonard Gene McNeese.

To order memorial trees or send flowers to the family in memory of Leonard McNeese of New Smyrna Beach, FL, please visit our flower store.
Send a Sympathy Card