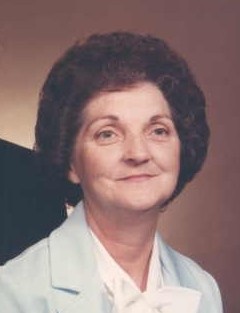 Naomi Rose Coleman Chapman went home to be with the Lord on March 19, 2019.  She was a devoted member of Liberty Baptist Church.  Naomi was born in Athens, Tennessee but lived for most of her life in Wartburg, where she raised her children and doted on her grandchildren and great grandchildren.  Although Naomi worked for a time at Red Kap Industries, her life’s work can be seen in the family she built and the care and love she showed them.  She loved nothing more than to rock a baby while she watched her stories and her children, grandchildren and great grandchildren are better people for it.  She will be remembered for her kind smile and unconditional love she gave to those around her.

The family will receive friends Saturday, March 23, 2019 at Liberty Baptist Church in Wartburg from 1:00-2:00 p.m. with the funeral to follow at 2:00 p.m. with Dr. Paul Frick officiating.  Interment will follow in the Liberty Church Cemetery in Wartburg.

Schubert Funeral Home is in charge of the arrangements for Naomi Rose Coleman Chapman.

Your browser does not support this video format. You should be able to view it in Chrome, Safari or Internet Explorer.
To order memorial trees or send flowers to the family in memory of Naomi Chapman of Wartburg, TN, please visit our flower store.
Send a Sympathy Card