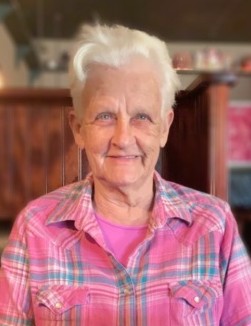 Peggy was a loyal and loving wife, caring mother and wonderful grandmother. She loved her children and grandchildren more than anything, except her dog Hoppy. She worked for Brushy Mountain State Penitentiary for 19 years as a food steward. When she wasn’t working, she enjoyed putting flowers together in her flower shop she once ran, spending time with her family and making her famous peanut butter fudge. Peggy never met a stranger, she welcomed everyone with open arms and fed them whether they wanted her to or not. She was brutally honest and had the biggest heart imaginable. She suffered much loss after her husband and two daughters passed. She soon after lost her mother, brother and beloved dog. However, she kept fighting. When she became sick, she never gave up. She fought right up until her very last breath. Peggy was a lover, a fighter and had the best sense of humor. She made everyone laugh and her smile lit the room. Her legacy will carry on for generations and she will be truly missed, yet never forgotten.

There will be a graveside service held on Saturday March 27, 2021 at 11:00 am at Victory Baptist Cemetery in the Stevens community.

To order memorial trees or send flowers to the family in memory of Peggy Sexton of Wartburg, TN, please visit our flower store.
Send a Sympathy Card