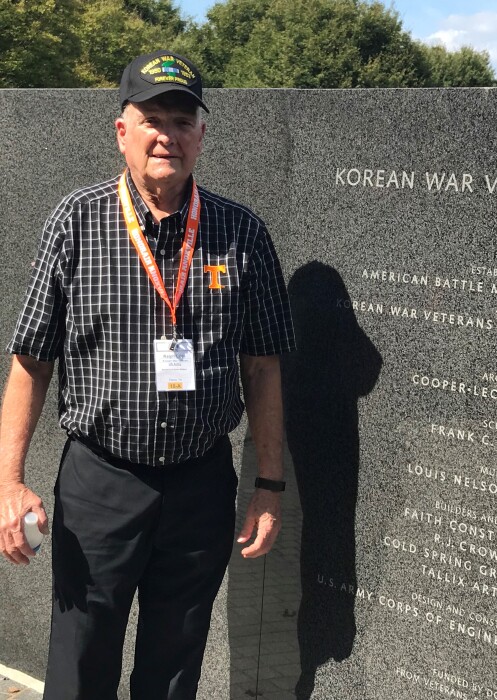 Edward "Ralph" Liles, age 88, left for his Heavenly home on January 12, 2021.  Having valiantly fought a number of health issues over the past few years, he passed away at Methodist Medical Center with his daughters and son-in-law by his side, from complications related to the COVID-19 virus.

Ralph retired after working more than 25 years from Martin Marietta - Y-12.  He worked as an electrician and was a member of the IBEW Local # 670.  Though he worked as an electrician, he was a master of all trades.  Ralph and his brothers together built their own houses and helped maintain and repair many others.  He was always happy to help family and friends and he gave liberally of his time and abilities whenever needed.  He enjoyed hunting with his brothers and many friends, working in the yard and garden and on his numerous ongoing projects.  He enjoyed being in the woods and sharing memories of his youth and days in the military.  He had many entertaining and amusing stories.

Ralph was proud of his military service.  He served during the Korean War from Feb 1953 until January 1955.  He rose to the rank of Staff Sergeant prior to his discharge.

What he loved most and what he was most proud of was his family.  He was a devoted husband.  His last request to his daughters was to take care of their Mom.  He was a loving and supportive father to his two daughters (who adored him) and a doting grandfather to his three grandsons.  They were his pride and joy.  He always enjoyed spending time with family.  Holidays and vacations were often characterized by Rook tournaments and round robin billiard contests - everyone sought to partner with Ralph to ensure they were on the winning team!

Ralph was a member of Petros Baptist Church for more than 60 years.  He willingly served in numerous positions wherever he was needed through the years.  Ralph loved his church.  Until his health prevented, he was faithful in attendance and always there when the doors were open.  He was certain to be standing at the entrance on Sunday morning with a ready handshake, a current bulletin, and a warm smile.  Through all of his recent health challenges, his faith never wavered.

The Family wishes to thank all of the compassionate caregivers who came to his home over the past several years.  We are truly blessed not only to have met such caring people but to have made lifelong friends.

Due to the ongoing global pandemic, the family decided to have a private memorial service.  The family very much appreciates all the love and support they have received and are disappointed to be unable to celebrate Ralph's life in concert with the many others who loved and respected him.  In lieu of flowers, the family requests donations be made to Petros Baptist Church at P.O. Box 310, Petros, TN 37845.

Schubert Funeral Home is honored to serve the family of Edward “Ralph” Liles.

To order memorial trees or send flowers to the family in memory of Ralph Liles, of Petros, please visit our flower store.
Send a Sympathy Card