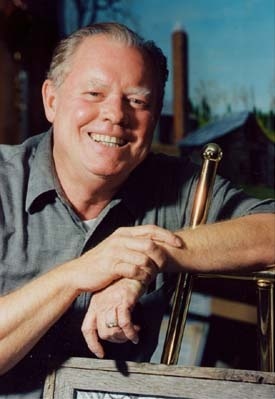 As a young boy and teenager, Ronnie loved to hunt with his cousin Wade Roberts and fish with his uncle Edwin Climer on the Tennessee River.   Ronnie and Wade were always getting into mischief, like the time as teenagers when they bought a rickety 1952 Cessna airplane to rebuild and Ronnie’s uncle Howard Roberts made them take it back to the man who sold it.

Ronnie also loved playing guitar and was in a band in Louisville, Kentucky when he was 16.  Later in life he continued to play guitar and have friends over to sing and record on his reel-to-reel recorder.

Ronnie married Sybil Fly (nee Henson) and had one child, Robert Earl Fly.  At the time, he was living in Florida and started a business, Fly Sign Company.  He invented a projection advertising machine for retail outlets, and a type of hammer to hold a nail for nailing.  His sign company flourished in the 70’s, with many billboards along I-40 and signage in the Jackson, TN area.

He retired from the sign business in the 90’s and moved to Gatlinburg, TN. There he ventured into the art and crafts community, where he opened Appletree Art Gallery.  The gallery carried his artwork and the works of famous artists residing in the Gatlinburg area.  His most notable print was “Spring Morningat Snapp Farm”.

He is survived by Sybil Fly and his son, Robert Fly of Troy, Virginia; his sister Anne Marie Fly Coffman; his grandchildren David and Jessica Fly.

A memorial service for his friends and family will be held on August 10, 2021.

Schubert Funeral Home is honored to serve the family of Ronnie Earl Fly.

To order memorial trees or send flowers to the family in memory of Ronnie Fly, of Gatlinburg, TN, please visit our flower store.