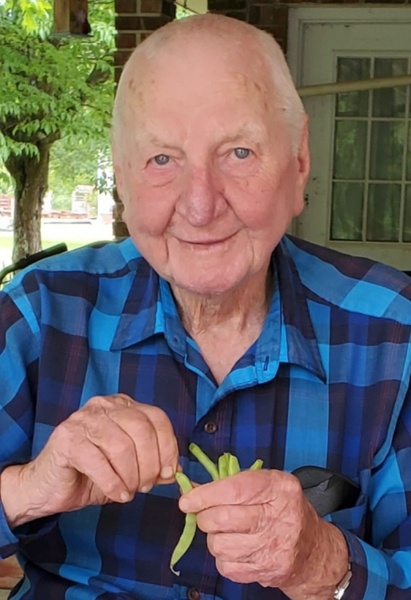 Rossie “Ross” Lee Jones passed away on July 30th, 2021 at the Life Care Center of Morgan County leaving this earthly life for his eternal life after a hard fought battle with illness.

Ross is preceded in death by his parents, Hugh and Dalice Jones; 2 sisters, Vera Morrison and Mary Lou Gustafson; and son, Jeff Smith.

Ross was born on May 11, 1934 to Hugh and Dalice Jones of the Gobey community. He was the oldest son of 7 children. He had a love and talent for fishing and gardening. He was a devoted member of Mossy Grove Baptist Church, where he could be seen in his back pew greeting guests and joyfully passing out peppermints to the children, old and young alike. He could be seen swinging on his front porch swing the majority of the day in the warm weather months while cooking for anyone that stopped by.

He served his country for 2 years in the United States Army and served his community as part owner of Jones Brothers Grocery for 13 years. Such a small space to appropriately describe 87 years of life, but it can be summed up that Ross lived a full life centered around family, kindness and generosity, and will be missed by all that knew him.

A special thank you to Life Care Center of Morgan County for excellent care and support.

Schubert Funeral Home is honored to serve the family of Ross Jones.

To order memorial trees or send flowers to the family in memory of Ross Jones, of Wartburg, please visit our flower store.